What is the trend of selling cars with high satisfaction?75 % of those who compare two or more purchasers, the average difference between the desired amount is about 150,000 yen.

If you think so, for those who are considering selling cars in the future, it seems that the purchase price is close to the desired price or exceeding it, but what about it?Also, is there any tendency in the way to be satisfied with the sale of your car?

As a result, it was found that 65%of the people were "satisfied" in the sale result, of which 75%of them compared two or more purchasers.

This survey was conducted from October 1, 2021 to October 4, 2021, for past users of "Zubat Moving Comparison", "Zubat Car Purchase Comparison", and "Zubat Real Estate Sale" operated by the company. Thing.

In the survey, we first asked about "reasons and triggers to sell cars".As a result, "I wanted to ride another car" was ranked first in 75 % of the total.Next, "I was able to let go due to sudden circumstances such as work and moving" was 15 %, so it was overwhelmingly separated from the second place.

In addition, 65 % of those who have purchased cars say they are "very satisfied" or "satisfied" in the result of the sale.

Furthermore, when we investigated the information sources referred to during the sale, regardless of the satisfaction of the sale result, it was said that "car buyers" were "car purchasers" and the next "car batch assessment site".

Next, the survey also questioned the reasons for "very satisfied" or "satisfied" in the result of the car sale.The result is that 68 % of the respondents say, "Because they could be sold with the desired amount (more)."After all, it seems that the satisfaction is the highest if it sells at the same or more than the desired amount.

In addition, if you have exceeded the actual purchase price of the originally desired amount, the average difference is 149,647 yen compared to the original sale amount.

By the way, except for the face of the money, answers such as "I was able to complete the sale within the desired period", "I was blessed with good buyers and the procedure was smooth," "I was able to buy a better car with the money I sold."It seems that there was also.It seems that there are a certain number of people who are satisfied not only for the purchase price but also for the period and service.

On the other hand, the reason for those who answered "somewhat dissatisfied" or "dissatisfied" in the result of the car sale.The result is 98 %, saying, "Because I couldn't sell it with the amount I wanted."It seems that there is a higher percentage of people because of the amount of money than those who are satisfied. 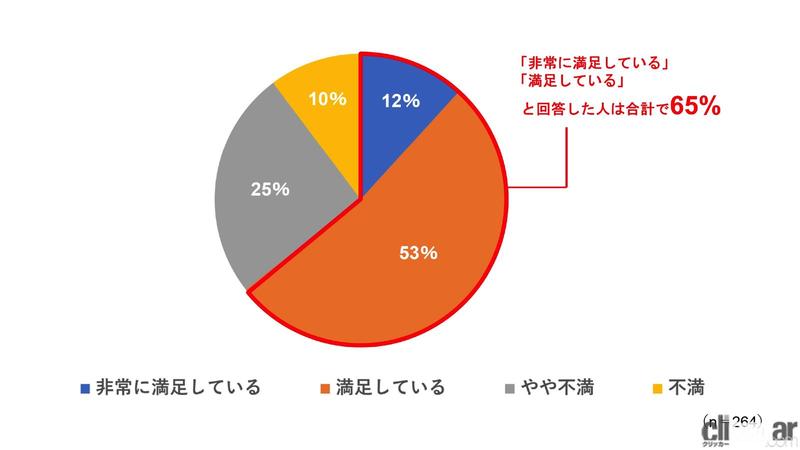 82 % of those who answered "dissatisfied" in the result of the sale answered that "the actual purchase price was lower than the originally desired amount."It is said that the average difference between those who had lowered the amount of purchases of the initial sale was minus 18850 yen compared to the original sale amount.

In addition, those who are satisfied with the results of the car sale seem to have a short period of time.

First of all, when I asked a person who answered "I am satisfied" in the result of the sale, "the time takes time from the selling period to the completion", "~ 3 months" is 93%first.The second place, "~ six months" 5 % was greatly separated, and became an overwhelming majority.

On the other hand, even those who were "dissatisfied" in the result of the sale were "~ 3 months" first place, but the overall ratio was 87%, and the second place "~ six months" was 11%.

As a result, it is clear that people with high satisfaction often have a short time from the sale period to completion.

In the survey, we have also heard about the number of car purchasers who requested assessment of their favorite car.

In both cases, it seems that many people compare multiple companies, but those who are satisfied seem to have a little tendency.

In addition, those who are satisfied are the most common reasons other than financial aspects, such as "the sale was completed within the desired period", although "because it was sold at the amount (more) you wanted".I know that there are a certain number.

Based on these, the web crew who investigated

"In order to obtain satisfaction in the sale of cars, it is important to proceed to the sale by convincing whether the presented assessed value is appropriate, and for that purpose, we know the purchase price of the car you want to sell.It is very important to keep it "

"The first clarification of what you want to value the most in the sale of cars, such as the sale amount, but also the period of sale, will lead to a highly satisfactory sale."

I also mention it.

Anyway, if you let go of your favorite car that you have been riding for many years, it is humanity that you want to buy at the as high as possible.However, in the case of used cars, the amount changes depending on the model, year, mileage, etc., so prior surveys seem to be important.

In particular, if you want to replace the next car, the sale amount of your car will also be a purchase fund, so you want to do it as carefully as possible.

Motorcycle high -speed toll -half price half price next spring start "Why does it take so long?"

■ Bike expressway traffic fees, long -awaited recruiting discounts are far away ...?The fixed rate discount for motorcycle expressway traffic is being embodied.It is an attempt to discount half the price of ordinary cars for a limited time.However, the Ministry of Land, Infrastructure, Transport and Tourism said "2 ... ...

fhána, TV anime "Mr. Kobayashi's maidragon S" The theme song of the theme song "Love Supreme!"release.Appearance Live decided to be held for the first time in about 2 years

Where can I sell used car audio equipment?